The Great Wall of Los Angeles is one of Los Angeles’ true cultural landmarks and one of the country’s most respected and largest monuments to inter-racial harmony. SPARC’s first public art project and its true signature piece, the Great Wall is a landmark pictorial representation of the history of ethnic peoples of California from prehistoric times to the 1950’s, conceived by SPARC’S artistic director and founder Judy Baca. Begun in 1974 and completed over five summers, the Great Wall employed over 400 youth and their families from diverse social and economic backgrounds working with artists, oral historians, ethnologists, scholars, and hundreds of community members. 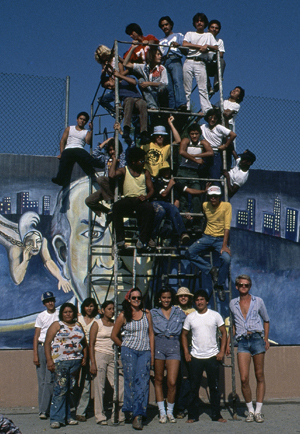 Its half-mile length (2,754 ft) in the Tujunga Flood Control Channel of the San Fernando Valley with accompanying park and bike trail hosts thousands of visitors every year, providing a vibrant and lasting tribute to the working people of California who have truly shaped its history. In 2000 and 2001 SPARC received acknowledgement and support from the distinguished Ford Foundation Animating Democracy: The Role of Civic Dialogue in the Arts initiative and from the Rockefeller Foundation Partnerships Affirming Community Transformation initiative. As well funding from the National Endowment for the Arts in 2013 and 2014.  SPARC continues to work on the Great Wall; next phase is to hold civic dialogue sessions and ultimately design the remaining four decades of the century (1960s-1990s).

The mural’s restoration, a critical need, and continuation with future panels produced by the next generation of children of the Great wall remains a vital on going program of SPARC. We are currently initiating a major fundraising campaign to restore, extend and create a full use park at the Great Wall thereby establishing the site as an international educational and cultural destination.

For the Complete History and Description of The Great Wall, please go to the next page >
A Personal Message from Judy Baca 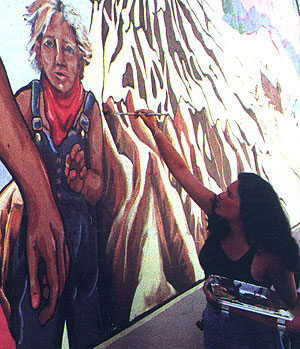 “In 1975 when the Great Wall was still a dream, I never imagined it would lead me, the more than 400 young “Mural Makers” and the 35 other artists on my team through such a moving set of experiences. Nor could I have imagined that 27years from the date the first paint was applied to the wall that it would still be a work in progress.
When I first saw the wall, I envisioned a long narrative of another history of California; one which included ethnic peoples, women and minorities who were so invisible in conventional text book accounts. The discovery of the history of California’s multi‑cultured peoples was a revelation to me as well as to the members of my teams. We learned each new decade of history in summer installments; the 20’s in 1978, the 30’s in 1980, the 40’s in 1981, and the 50’s in 1983. Each year our visions expanded as the images traveled down the wall. While our sense of our individual families’ places in history took form, we became family to one another. Working toward the achievement of a difficult common goal shifted our understandings of each other and most importantly of ourselves.

I designed this project as an artist concerned not only with the physical aesthetic considerations of a space, but the social, environmental and cultural issues affecting the site as well. I am not a social worker, though people mistakenly call me one and I am not a teacher although I have teaching skills. I draw on skills not normally used by artists. I’ve learned as much as I’ve taught from the youth I’ve had the good fortune to know by working alongside of them. They’ve taught me among other things how to laugh at myself, how to put play into hard work, and how not to be afraid to believe in something. I am extremely grateful.

Perhaps most overwhelming to me about the Great Wall experience has been learning of the courage of individuals in history who endured, spoke out, and overcame seemingly insurmountable obstacles. It was true both of the people we painted about and of ourselves the Mural Makers.”
– Judith F. Baca