The event is being held to assist with an effort to create a re-vitalized presence for the Center for Digital Storytelling in Los Angeles. CDS operates field offices across the US and Canada, and is working with local community members to bring their services to Santa Monica and the westside of Greater Los Angeles. CDS provides a broad range of training, media production and consulting services for projects with non-profit and civic organizations in education, social services, public health, environment and human rights.

CDS will sponsor a workshop for the general public on April 12-14, 2012 at Vidiots as part of this effort. Long time CDS associates Gayle Nicholls-Ali and Rasheed Ali will present a series of sample stories to open the event to introduce our work and how it has developed.

For more than 30 years all three have worked in theater, visual arts and media to engage local communities in making their stories visible to a larger public. Joe Lambert has been active in the San Francisco Bay Area’s theater and arts scene from the early 80s as a producer, writer, educator and activist. Over the last two decades he developed a media education philosophy and methodology, Digital Storytelling, that is practiced across the country, and throughout the world.

For forty years, Professor Baca has garnered vast international recognition for her work as a muralist and educator, having led the creation of the most famous mural in the US, the Great Wall of Los Angeles. She has remained at the center of the ongoing controversies in Los Angeles and around the country about the role of community-based public art.

John Malpede, in founding the LAPD in 1985, made a commitment to engage the homeless and poor residents of Skid Row in downtown Los Angeles by providing a way for engaging residents in the creation and sharing of their stories. Dozens of productions and events in Los Angeles, as well as a large number of collaborative projects with artists across the US, Europe and Latin America, has made Malpede and LAPD’s efforts legendary in the community arts field.

All three of these leaders, have dedicated themselves to processes of putting the tools of neighborhood and grassroots expression in the hands of neighborhood members. Together they have spent a century of effort in insuring that these stories will supplant the negative and destructive stories told by mainstream media about those communities.

The restoration of the Great Wall of los Angeles is a massive undertaking. Every segment of the 2,750ft is cleaned, examined and treated to bring it back to its original state of brilliant color. Within the three month dry season in the Los Angeles River the work must be completed racing against a clock that is determined by the difficult conditions of heat, water flow, rain and other factors of the unique site in the los Angeles flood control channel. The site channels the main water flow through the San Fernando Valley to the ocean and becomes extremely perilous in a rain storm so weather watches and evacuation methods are a constant worry for the 30 members of the restoration team composed of professional muralist, interns from universities around the country, local volunteers and past participants of the Great Wall productions over its 35years of existence.

JUDY BACA among 10 artists honored by ArtTable at MOMA

JUDY BACA among 10 artists honored by ArtTable at their 30th Anniversary Gala Event-April 16, 2011 in New York.

The Gala event will profile women’s leadership by recognizing 10 artists whose contributions to the field have impact beyond traditional studio practice. ArtTable’s Artist Honors will celebrate the ways that many leaders in the arts draw inspiration from their studio practice to transform the field, its institutions and its structures. 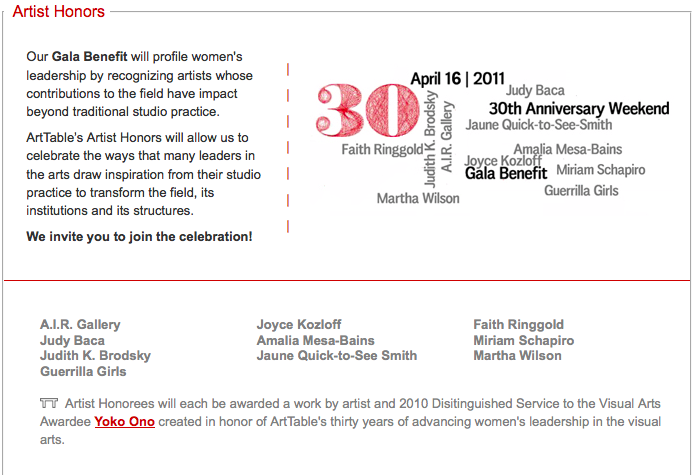 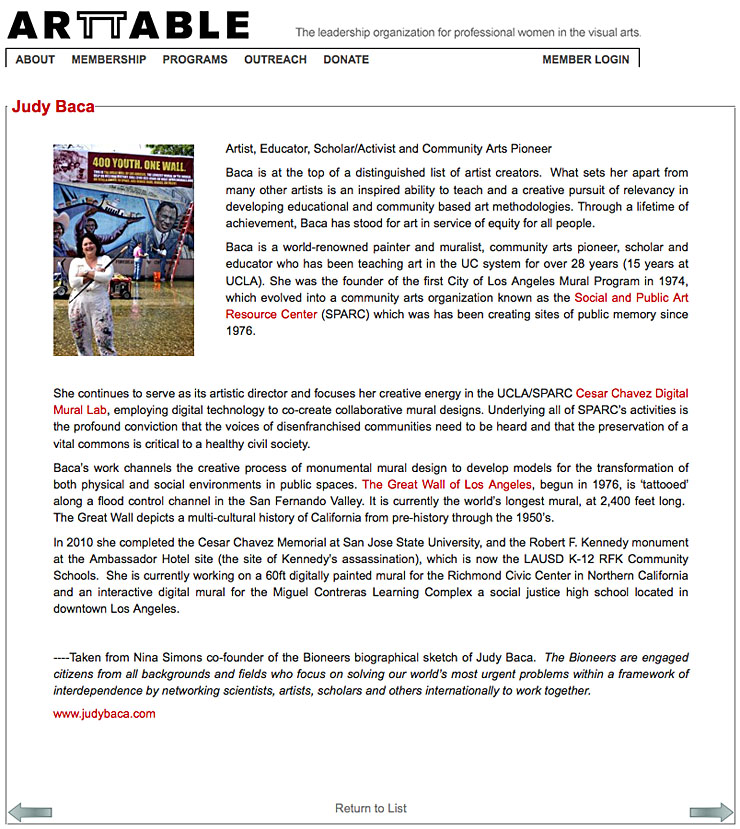 Judy Baca spoke at Sothebys on April 16 at the art panel discussion among art professionals and art institutions who facilitate and participate in artists’ projects that transcend traditional studio practice and often include performance art, public art and art in public spaces, political activism and engagement with the major social and environmental issues of our time. This panel, was moderated by Barbara T. Hoffman, Esq., The Hoffman Law Firm. Other panelists were: Holly Block, Director, Bronx Museum of the Arts; Anne Pasternak, Director, Creative Time; and Martha Wilson, founder of Franklin Furnace.

Seeing Through Others Eyes (Final Version)

On June 5th, 1968 Robert F. Kennedy was shot and assassinated in the food-service pantry next to the ballroom of the Ambassador Hotel after having won the California Primary. The Ambassador Hotel, located on Wilshire Boulevard at mid-city, is being converted into the new LAUSD RFK Community of Schools for K-12. The school’s library, formerly the ballroom, will be the sight of Professor Judy Baca’s latest work: a two-mural memorial to RFK, a Senator who was revered as a leader of the ideals of hope and compassion and an advocate for the equality of all people. The murals were completed in September 2010.

In the mural Seeing Through Others Eyes, a lotus blossom determines the composition of the mural both formally and conceptually. Each petal represents one of the issues facing society that Robert F. Kennedy deemed most important: Environment, Intolerance, Poverty, Education, Health, and War. We see these things through different eyes; the eyes of a soldier, a woman and her ailing mother, a poverty stricken child. At the center of the blossom sit two enlightened men: Kennedy breaking bread with César Chávez after Chávez’s 36-Day Fast for Life. Juan Romero, the busboy who cradled Kennedy after he was shot, is depicted to the left of Kennedy. While one million people march in the background lead by Dolores Huerta, a legendary figure in the labor movement in this country. She co-founded the United Farmworkers of America, which plays a major role in organizing opposition to proposed immigration reform legislation.

This Interactive Digital Mural will be seen as one whole and each section will be a whole composition and able to be independently viewed. The entire work will incorporate an interwoven narrative in three layers, which consist of:

•First Layer: Represents “The Land” – El Camino Viejo created by Tongva feet and hoofs of oxen evolving into what became known as Wilshire Blvd. and the first thorough way for autos in Los Angeles on which the Ambassador Hotel would become a major landmark.

•Second Layer: Represents the People and Historical Events in Los Angeles – 1921 to 1968 – particularly as they relate to the full spectrum of ethnic communities in Los Angeles.

•Third layer: Represents Robert F. Kennedy’s narrative that leads him through his life to the primary election victory celebration in Los Angeles. We will focusparticularly on his views about poverty, the Vietnam War, education, health care, intolerance and the environment.

Judy Baca and her latest mural Seeing Through Others Eyes

The concept of the panels is that they are a sequential work of art, which can be viewed as one mural or as individual vignettes. While the murals are to be seen daily by children, it is not strictly a children’s work of art, but a public artwork that is in the tradition of the WPA and the Great Mexican Mural Tradition of the 20th century- works of art that are meant to last for 100’s of years and of the highest quality and can be studied by children for generations to come.

Movie on the installation of Tiny Ripples of Hope

Judy Baca Lectures at the Maryland Institute College of Art

Maryland Institute College of Art (MICA) is an art and design college in Baltimore, Maryland, USA. It was founded in 1826 as the Maryland Institute for the Promotion of the Mechanic Arts, making it one of the first and oldest art colleges in the United States. In 2008, MICA was tied for #4 in the nation among fine arts master programs by US News and World Report, and its Graphic Design Master of Fine Arts program tied for #6 among graduate schools for Graphic Design. MICA is also a member of the Association of Independent Colleges of Art and Design (AICAD), a consortium of thirty-six leading art schools in the United States, as well as the National Association of Schools of Art and Design (NASAD).

Art and Public Space in Los Angeles at the Hammer Museum

Judy Baca speaks about art and public space in Los Angeles at the Hammer Museum.

Public art has long been a site for negotiating community and contesting urban territories. Using the mural as a jumping off point, panelists will engage in a discussion about public art, community identity, art and activism, and new models for socially-engaged art practice. The panel includes artist Edgar Arceneaux, founder and director of Watts House Project; Judy Baca, artist and founder of SPARC (Social and Public Art Resource Center): interdisciplinary artist Sandra de la Loza, founder of Arts and Action; and Christine Y. Kim, associate curator at the Los Angeles County Museum of Art (LACMA) and co-founder of the public art organization Los Angeles Nomadic Division (LAND). Moderated by Chon Noriega, director of the UCLA Chicano Studies Center, this program is one of the events commemorating the 40th Anniversary of the UCLA Chicano Studies Research Center and other ethnic studies center at UCLA.

The exterior niches that now stand at San Jose University are now being created into mosaics in the SPARC gallery. A ton of glass (500 lbs) has been specially ordered from Cuernavaca, Mexico, the original factory that produced Siqueiros’s mosaic tile. Each exterior niche stands 4ft X 9ft tall and is a representation of Dolores Huerta, Gandhi, and a female and male farm worker from Salinas Valley. The mosaics will be completed this year. For more information on visiting the SPARC gallery as the mosaic production progresses please contact us a info@sparcmurals.org.

The arch’s main mural depicts a contemplative Chavez over the fields of California, where the great boycotts took place. In the sky, Chavez’s meeting with Robert Kennedy during his great fast (accompanied by his wife and his mother) is highlighted, as fasting was a cornerstone to his philosophy of non-violence. Also in the sky, the virgin Guadalupe is also blessing his actions. Finally, a calaca (skeleton-skull) is depicted to represent the deaths resulting from the pesticide clouds being sprayed in the fields.

The concept of the Monument is to commemorate Chavez through his ideals rather than to create a traditional European approach to a fallen soldier or important personage through a bust or bronze statute. It is not his personality that is to be remembered but his ideals and beliefs carried out in his actions to improve the conditions of the campesino, which inspired so many to join his efforts to achieve social justice. A key element to the monument is to teach the next generation how to choose to live a life in the center of your values and beliefs as Cesar Chavez did. Modeled on a Mayan corbelled arch with rounded mission arches, this site pays tribute to Chavez’s respective Spanish and indigenous roots. This arch is placed at the opposite site of the small plaza to necessitate pedestrian passage through its opening which will encompass the viewer with images of Chavez’s life inside the arch.

The Cesar Chavez Mosaic Production has begun at SPARC. These pieces will be installed at San Jose University, CA. The mosaic team is composed by Francois Bardol and Martha Ramirez, and is supported by the UCLA/SPARC Cesar Chavez Digital Mural Lab.